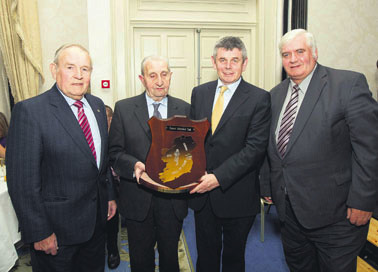 It is with great sadness and regret that we have lost a great stalwart of our club, Jack Devine. Jack was born in 1922 and had in interest in Gaelic games from an early age and first played for Boyerstown in the 1920’s. Despite his own career being cut short due to ill health and the folding of the Boyerstown club his interest in GAA was only beginning. Together with his brother Paddy, he cycled their way to Meath games all over Leinster, until motorised transport became more prevalent at which point Jack was known to travel to games in an open back truck. His encyclopaedic knowledge of Meath GAA stayed with Jack until recently and he had an amazing ability to recite the teams of the 1940’s and 50’s. Nothing gave Jack greater pleasure than watching the Meath teams in action. He could recall each of Meath’s All Ireland wins, the pick of which was when in 1996 with clubman Tommy Dowd as captain that was closest to Jack’s heart.

While Jack may not have been a star on the GAA pitch, it was off the pitch as an administrator of Dunderry GAA Club where he really shone. In over 50 years as member of Dunderry GAA he rarely missed a club game, often attending four games in a weekend, whether it was championship, league or even a friendly match. He served the club with distinction and his polite quiet manner was always appreciated by his fellow members. He was well known all over the county, especially in East Meath where he worked for many years with Meath County Council. Jack had an unmatched ability writing match reports as club PRO and attention to detail of countless matches, where each score was only noted “when the umpire had the flag raised” led him to numerous accolades from the Meath Chronicle and saw him inducted into the Meath Hall of Fame in 2011.

The undoubted highlight of his time with Dunderry was the club’s senior championship win in 1995, which he spoke of up to his final days with us. The club honoured Jack in a number of ways, inducting him as a Life President and club person of the year on multiple occasions. His loss was felt keenly around the parish and the turnout from players young and old at his removal and burial showed the depth of feeling towards Jack from all associated with the club. Jack was not only a great clubman, but a fantastic family man and will be missed by his wife Celia, daughters May, Kathleen, Patricia and Ann as well as his extended family, neighbours and large circle of friends.

Dunderry GAA are proud to count Jack as one of our members. May he rest in peace.